"Magenta does not exist"

How is it, then, that science-journalists have come to propagate such a patent lie?

Well, the answer is; materialism.

Step two, you discover that there is no magenta when you shine a beam of light through a prism.

Never mind that Goethe demonstrates that there is indeed magenta when light shines through a prism - only, you have to project a thin beam of shadow through it instead of a thin beam of light (see diagram bellow)

But you are a materialist. Only what is positively THERE can be considered real. So naturally, only the light is real, not the darkness. You then automatically conclude that magenta is a composite of blue and red wavelengths - in other words, you arrive at a lie - that magenta doesn't really exist.

As a materialist, you over-look the fact that, according to your own metaphysical assumptions, ALL colour is not "really there" - but never mind that, you aren't particularly interested in thinking things through - after all, thinking "isn't really there" either.

I state all this so-as to illustrate a point. If science journalists can propagate such absolute non-truths as "magenta is not a real colour" as a result of their materialistic delusions, imagine what catastrophes of misinformation they are capable of when it comes to health.

Top diagram shows the classic prismatic colours, where a thin beam of light is shone through a prism.

Below show's Goethe's inversion of the above; where a thin beam of shadow is "shone" through the prism. Here the prismatic colours are inverted, with magenta in the middle. 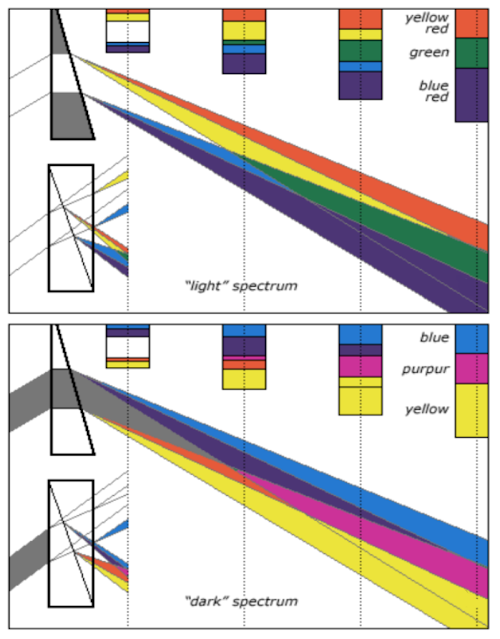