I wonder if anyone else has also noticed this: that people often prefer to say "Jesus" rather than "Christ". And when someone does attempt to say "Christ" in casual conversation they almost trip over their own tongue...


Watch Christopher Hitchens or Richard Dawkins dismantle religion - they will never say the word "Christ" during their many attacks. Even for these hardened atheists, this name seems to be off-limits.

My sense is that this is because most people have a deep unconscious sense, even if they are nonreligious, of the difference between these two names. "Jesus" designates a person exterior to myself and everyone else - I can mention his name in casual conversation like any other name. But "Christ" on the other hand, whether one is religious or not, is not just a name.

The way I experience it (perhaps its just me) choosing to say the word "Christ" instead of "Jesus" is tantamount to simultaneously exposing something intimate in myself as well as exposing something intimate in the other person - without warning or consent. When I say "Christ" it is like addressing a being who is at the same time me, the other person - and Christ - all at once.
- January 21, 2020 4 comments:

It follows from the concept of brain elasticity that neural activity will shape itself according to the type of thinking we do.
From this it follows that if we continue assuming that our thinking is determined by how our brains are shaped, our brains will shape themselves accordingly.
If one wants to break this cycle, the place to start is obviously then not by studying the brain, but rather by studying thought itself.

Of course there are a plethora of examples that show how differently men and women think.

But if this is the last word on the nature of thinking, then all communication and learning is rendered impossible.


The fact that we can communicate at all with each other proves the opposite. In any case, who knows what would happen if, instead of spending so much time and energy reinforcing our differences we might make more effort in understanding each other better.
By "understand each other" I don't mean simply forgiving the other person because, oh bless, "their brain just works differently to mine". That isn't understanding, that is just patronising.
I mean really understanding each other - by making the effort of seeing and thinking how the other person sees and thinks.
Again, the cycle is broken with the effort to understand, ie, with thought - as opposed to identifying ourselves according to predefined biologically differences.

This is a challenge and even a direct threat to anyone who's whole identity is defined and reinforced by such differences.
- January 21, 2020 2 comments:

In Defence of Civilisation - Response to Bruce Charlton

Bruce Charlton has made a prediction regarding the future of civilisation.
In it he argues that due to the evolution of consciousness, political systems will not survive - "at least nothing on the scale of any current nations".  He then goes on to say that "the experiment of human civilisation will come to an end."

While I think Charlton's prediction is almost certainly true for our current political system, I object to what seems to me his assumption that bureaucratic political systems as such are the defining feature of all civilisations in general.

In fact, I would go as far as to suggest that bureaucratic political systems increase in proportion to the deterioration of civilisation.

Defining civilisation in terms of abstract political systems also blocks any understanding as to how the organising principals behind civilisation have shifted as a result of the evolution of consciousness.


For the great civilisations of the past were not "experiments" invented in the minds of social theorists - they were the expression of a divine order that people experienced within consciousness. People participated in civilisation according to principals that were immediately real to them - not abstract. The Ancient Greeks philosophised about politics and society in the sense that they wanted to fully comprehend the divine order behind these outer phenomena. They were not social reformers, setting out to plan, abstractly, a utopian society along utilitarian lines like we moderns do.

For this reason it would also be meaningless to suggest that ancient civilisations were "authoritarian". They only appear that way to our modern way of thinking. Once one accounts for the evolution of consciousness it becomes necessary to attribute the god-like leaders of past civilisations as an expression of that reality.

The general trend of the evolution of consciousness in terms of the organisation of civilisation has been a shift from universal Spirit to particular Spirit. Whereas before the ordering principals giving expression to civilisation originated in the consciousness of a divine world order (universal) - from now on and into the future this organising principal springs from the consciousness that each individual can establish for him/herself moral intuitions that are intuited directly from real personal situations (particular).

This is a reflection of the Christ principal expressing itself in how society organises itself. In Christ, God became a man. The Universal became a particular.

The civilisations of the future will be at least as magnificent and splendid as any great civilisation of the past. Only they will be the fruit, not of the Gods and God-like leaders, but of each individual's loving participation.

It might seem wildly idealistic to believe that great civilisations could be left up to individuals to organise by themselves, and that in reality we will always require some impersonal system to keep everyone in check.


But this attitude can be abandoned when the Christ event is properly understood - for it has always been consciousness behind the expression of civilisation - and therefore, to the extent that human beings are conscious today, they are fit for the task.This is not to say that impersonal systems have never played a role in any civilisation - only that such systems do not produce civilised human beings, but rather presupose them.

As soon as we see the total bankruptcy of these systems at giving life to any civilisation, past, present or future - and as soon as we see that the wish to rely on such systems now is just a puerile and hopeless attempt at avoiding our responcibility - we will allow ourselves and others the dignity in realising what we are here for.

Charlton asks us to trust in God. On account of the evolution of consciousness I must add - trust in the human being.

This post is inspired by Rudolf Steiner's Philosophy of Freedom.

The failure of the tower of Babel to reach God was not due to people not being able to build high enough. Its failure was not a technological one, rather the project was doomed because in principal no matter how high one builds one cannot reach God that way.
These days people assume that there is a technological solution to most of the world's problems. Our confidence in our science and technology has given us the idea that we don't need God, that instead our technology will save us. 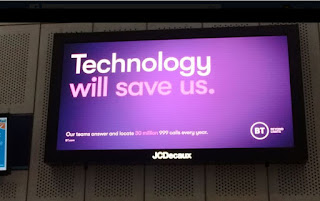 Anyone who believes this hasn't come to grips properly with the story of the tower of Babel.
- January 09, 2020 No comments: