Only Fools and Horses - "What are they going to do about it?"

To live in final participation will not mean carving out time in your day to pray and meditate on higher things. Instead prayer and meditation will issue from you as irresistibly as you draw breath, for no other response to the majesty of life and all its details will be worthy.

What follows is an extract from a 1919 lecture cycle titled Lucifer & Ahriman by Rudolf Steiner. The larger context is the approaching incarnation of Ahriman some time in our current millennium, in the West, probably America. Steiner describes how, 3 millennia BC, Lucifer incarnated in the East, probably in China. Christ of course incarnated in the person of Jesus. And now, entering the beginning of the third millennium AD Ahriman will incarnate, and the signs of his coming arrival are now fully manifest all around to see. The point is not to resist or fight Ahriman's incarnation, for it is inevitable; the point is to orientate ourselves in the right way so that the Ahrimanic currents leading to his arrival can be used for good. For this a new wisdom has to be bourn, springing from the effort and struggle of individual human beings to wake themselves from their indolence and rejection of the spiritual.

Ahriman, though, will like nothing more than to keep us ignorant of his arrival, and....

"If, in the future, man were to do nothing himself towards acquiring a new wisdom, then, unconsciously to him, the whole of culture would become Ahrimanic, and it would be easy for the influences issuing from Ahriman's incarnation to permeate all civilisation on the earth.

What would be the result if men were to follow the strong inclination they have to-day to let things drift on as they are, without understanding and guiding into right channels those streams which lead to an Ahrimanic culture? — As soon as Ahriman incarnates at the destined time in the West, the whole of culture would be impregnated with his forces. Through certain stupendous arts (technologies) he would bring to man all the clairvoyant knowledge which until then can be acquired only by dint of intense labour and effort.

Lovers of ease who refuse to have anything to do with spiritual science, would fall prey to his magic, for by means of these stupendous magic arts Ahriman would be able to make great numbers of human beings into seers — but in such a way that the clairvoyance of each individual would be strictly differentiated. What one person would see, a second and a third would not see (emphasis added). Confusion would prevail and in spite of being made receptive to clairvoyant wisdom, men would inevitably fall into strife on account of the sheer diversity of their visions. Ultimately, however, they would all be satisfied with their own particular vision, for each of them would be able to see into the spiritual world. In this way all culture on the earth would fall prey to Ahriman. Men would succumb to Ahriman simply through not having acquired by their own efforts what Ahriman is ready and able to give them. No more evil advice could be given than to say: “Stay just as you are! Ahriman will make all of you clairvoyant if you so desire. And you will desire it because Ahriman's power will be very great.” — But the result would be the establishment of Ahriman's kingdom on earth and the overthrow of everything achieved hitherto by human culture; all the disastrous tendencies unconsciously cherished by mankind to-day would take effect.

Our concern is that the wisdom of the future — a clairvoyant wisdom — shall be rescued from the clutches of Ahriman. Again let it be repeated that there is only one book of wisdom, not two kinds of wisdom. The issue is whether this wisdom is in the hands of Ahriman or of Christ. It cannot come into the hands of Christ unless men fight for it. And they can only fight for it by telling themselves that by their own efforts they must assimilate the content of spiritual science before the time of Ahriman's appearance on earth.

That, you see, is the cosmic task of spiritual science. It consists in preventing knowledge from becoming — or remaining — Ahrimanic. A good way of playing into Ahriman's hands is to exclude everything of the nature of knowledge from denominational religion and to insist that simple faith is enough. If a man clings to this simple faith, he condemns his soul to stagnation and then the wisdom that must be rescued from Ahriman cannot find entry. The point is not whether men do or do not simply receive the wisdom of the future but whether they work upon it; and those who do must take upon themselves the solemn duty of saving earthly culture for Christ."

To awaken this new wisdom I personally recommend studying Steiner's Philosophy of Freedom. This book not only awakens a brand new thinking in us, it also lays the methods and foundations for all his later works regarding "spiritual science".

The Archangel Michael Slays the Dragon

Even the most brilliant scientific stories can only ever make the ranks of "current hypothesis", who's validity only lasts until a "better" hypothesis comes along. They are allowed to be "true" so long as the data support them. As soon as new data comes along (and it might come along at any moment) a new "story" takes top place. And then there is the pinnacle of materialistic scepticism; the idea that the world is in principal impenetrable to human story, that our stories will only ever be just that - mere theory.

This is an utterly unsustainable situation for the human soul, embedded as it is in the story of our personal lives. For beings who's lives consist of manifold stories to believe deep down that the world is ultimately story-less, and that our stories are nothing, is what Steiner called "being devoured by the dragon" (GA 217 Becoming Michael's companions)

But if narrative and objective reality indeed touch then the world is ultimately akin to human story proper.

Michael isn't satisfied with us relying on religious faith alone, he wants us to really see this as the case, he wants us to behold the Christ with our own eyes. Only then will his mission be accomplished.

(At the beginning of the full interview it is revealed that Jonathan Pageau made Jordan Peterson a wood carving. No prize for guessing the theme of the carving!)

Owen Barfield says; "We shall not be able to save souls unless we also save the appearances".

The "appearances" are the objects of this earthly world, which include our own earthly selves. It is therefore not enough just to "combat" earthly concerns with spiritual concepts of other-worldliness. If our soul is to be saved, these objects must also be saved. Why? Because our bodies are currently one of those objects, and if this fact is ignored, and we assume we can be saved without our bodies also being saved, then we are merely escaping our humanity instead of seeking real redemption.
Steiner stressed the need to see evil as being twofold: Lucifer and Ahriman are the two extremes on either side. To ignore the world, or replace it with "higher things" is what Steiner would call the Luciferic tendency in spirituality. An example of the Ahrimanic tendency being materialism with its concept of the human being as mere biological machine.
Christ is the middle way, the balancing of the two polar extremes. He is neither the Ahrimanic materialism of the "this-worldly" nor the escapism to the "higher-worldly" of Lucifer. Hence we can see that the human ego treads between these two extremes, and in the middle is the point at which Christ touches the world. To either reduce the earth-bound ego to material processes, or to escape it completely in spiritual heights, are literally un-Christian paths. 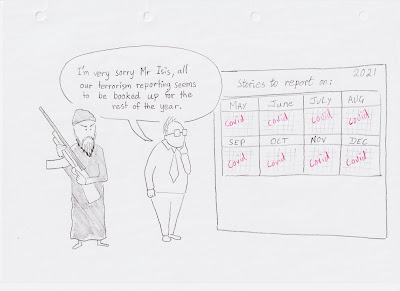 The approaching societal fall-out is going to progress faster than any narrative of it will be able to keep up with. All attempts to conceptualise what is happening will fractal and multiply incoherently (as they already have been). It follows that all measures to "save" society will only feed the collapse by further exacerbating the situation. The only possible way to understand the fall-out and counter it will be to confront it at the personal level. All generalising theories about what is happening and what aught to be done will of necessity lead away from the solution and further down into darkness. The only society that can survive this is one where each individual addresses their personal situations at an individual-to individual level, avoiding all abstractions and generalisations.

We must eradicate
from the soul
all fear and terror
of what comes to us
out of the future.

We must think only
that whatever comes
is given to us
by a world direction
full of purpose.

It is part of what we
must learn in this age,
namely to live out of pure trust,
trust in the ever present help
of the spiritual world.

Truly, nothing else will do,
if our courage is not to fail us.

Let us discipline our will,
and let us seek
the awakening within ourselves,
every morning and every evening.

Only Fools and Horses - "What are they going to do about it?" 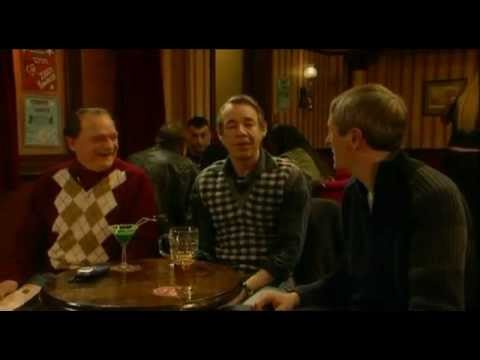